Ridley (Space Coloney): Once you get less than 30 energy Ridley will fly away so you can just try to get hit and don't bother shooting him. But if you shoot him enough he'll drop the metroid, pick it back up and fly away. It is said that if you catch the metroid, then you can play the game and the metroid will be on you or it will follow you around for the whole game. I have never been able to do this before, so I'm not sure if this is actually possible.

Chozo Statue (Crateria): Shoot missiles at it and roll under it when it jumps. When you run out of missiles shoot the projectiles it spits out of it's mouth.

Spore Spawn (Brinstar): If you roll into a ball and go on the ledge on the left, he won't hit you. You can shoot his little spores to get more missiles. Every time he opens up shoot the inside of him. It takes around 10 missile shots to kill him. 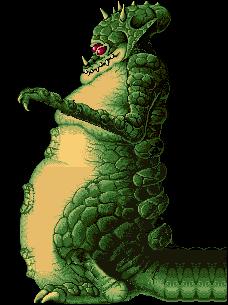 Kraid (Brinstar): His weak point is his mouth. Shoot his face and he'll open his mouth. When he opens his mouth shoot in it with missiles or super missiles. At first he isn't that big, but once you hit him a few times he breaks throught the ceiling and becomes bigger (he actually just stands up). The Curved things that he shoots out can be shot at to give you energy,missiles, etc. The little spiked things that he shoots out can be used to stand on.

Crocomire (Norfair): His weak point is his mouth once again. Every time you hit him he moves back. You need to move him back on to the blocks that break away and he'll fall into the lava. Charge beam is perferable because it pushes him back faster and never runs out. Once he falls in to the lava go over to the left and you'll see a wall of spikes just wait for a moment and...Huh? What's this? He's back but he's too weak to hold him self up he'll just fall to the ground.

Phantoon (Wreaked ship): As long as his eye is open and he's solid, you can hit him with missiles or charge beam (I perfer missiles). You can hide from corner to corner. He gets really angry if you use Super Missiles on him; fortunately, a charged screw attack is a good defense when he starts throwing those difficult-to-avoid attacks.

Botwoon (Maridia): The best place to stay is in the lower left corner and when he pokes his head out shoot him (hold the R button) with super missiles or missiles. Try not to get hit by his body. He's pretty easy and quick to beat. 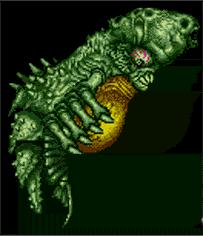 Draygon (Maridia): The easiest way to beat him is to electrocute him. First shoot all the little cannons on the wall with missiles. Then turn on your grappling beam and let him grab you. While he's holing you, grapple on to a cannon that you brok earlier. It will drain all of his energy and some of yours (about 4 or 5 packs). The other way to beat him is to shoot missiles at his stomach. To protect yourself you can roll into a ball which will lessen the damage you take.

Golden Chozo(Norfair): Use similar things to what you did with the first one. He's vulnerable from behind and you can shoot at him from the front, but when you shoot missiles and super missiles at him he can he can catch them so they don't hurt him. I recomend Charge beam if you are tring to hit him from the front. 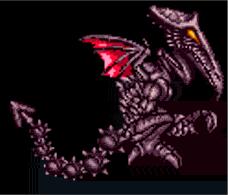 Ridley (Norfair): If you have the space jump and screw attack, this should be no problem. Just jump up to the side opposite of where he goes up to throw his projectiles. You will be invincible. As he swoops down, stop spinning and throw as many missiles as possible. If he comes down slowly to pick you up, just stand below him and fire away. There's a magical point at the left of the platform where you can shoot up into his face while he tries to pick you up without succeeding. Also, if you have power bombs and the spring ball, you can soften him up with power bombs in the air before you begin your assault.

Mother Brain (Tourain): Shoot at the glass case until it breaks. If you want you can go back and stock up on missiles (don't worry the damage you did will stay). Keep shooting the brain and soon every thing but you and the brain will blow up. You will be in a square room. The brain will grow legs and it will stand up. Quick start shooting her in the head. She'll drop bomb that explode on the floor and she'll shoot little blue circles at you. Try to avoid them and keep hitting her. Once you hit her enough she'll start to shoot streams of balls of fire at you. Keeps shooting at her. She'll start to charge up for her unmissable beam. It'll take away alot of energy (some where around six energy tanks). Then she'll start to charge up for another one when the metroid comes and sucks the energy out of her. The metroid will then come and latch on to you and refill your energy. Once your energy is full the metroid gets off you and goes off the screen. It comes back but right as it comes back mother brain shoots it and kills it. You have the hyper beam now and it's pay back time. Keep shooting her head like crazy and she'll die. Untitled document